For a publication that has published barely 10 editions satirising Islam in the past decade, Charlie Hebdo has earned its ‘Islamophobic’ label rather effortlessly. ‘Islamophobia’ even in its most liberal definition would at least imply prejudice against Islam, Muslims or any variation thereof.

Accusing a magazine that has mocked Christianity thrice as many times in the same duration, and religion in general twice as much, of bias against Islam betrays – at the very least – bias against the publication. Maybe it’s because there weren’t any murders, or violent protests in faraway lands, for the other over 1,200 editions of the French magazine.Then perhaps we Muslims should urge radical members of other communities to help make Charlie Hebdo less Islamophobic.

But then it takes one caricature of Prophet Muhammad for one to be accused of hostility against every single one of the over 1.6 billion Muslims around the world. It does not matter whether that depiction often satirised the radical Islamists’ perception of him and not the Prophet himself. It does not matter either that Islam has had a long tradition of drawing the Prophet Muhammad as a tribute.

And most of all, it absolutely does not matter that Islam and Muslims are not the same entities, and that the former is just as open to satire and/or ridicule as any other ideology – if it did we’d have long shunned ‘Islamophobia’ for Muslimophobia.

Once it was established that Charlie Hebdo is Islamophobic – and this was at least three years before their journalists were killed for, well, being Islamophobic – it was easy to interpret the magazine’s staunch support of Arab/Muslim immigrants as Islamophobic as well. The latest examples being the two Aylan Kurdi editions mocking the West’s neo-Orientalist approach towards the Syrian refugee crisis, and the right-wing’s rhetoric following the Cologne attacks, respectively. Even so, all of this was satire, and could be (mis)interpreted to suit one’s favourite narrative. It takes more dedication to misrepresent straightforward critique.

Charlie Hebdo’s latest editorial titled, ‘How did we end up here?’ has had many self-congratulatory responses of writers parading the conclusive proof that the French magazine indeed is Islamophobic after “finally stepping away from the mask of ‘it’s satire and you don’t get it.’” The editorial claims that jihadism is merely the tip of the iceberg; the violent manifestation of the extremism that is brewing inside Muslim communities. It urges Muslims to do more to address the radicalisation within the community and criticises the West for going too soft on Islam, and Muslims, for fears of being accused of, again, Islamophobia.

That, in a nutshell, expresses precisely what many liberal voices in the Muslim world have been saying for years. The editorial was, however, (mis)interpreted as accusing all Muslims for Islamist terror. Rarely is the ‘all-Muslims, no-Muslim’ false binary more conspicuous than when some sections of the left are condemning Charlie Hebdo’s Islamophobia.

Of course, the editorial can indeed be criticised for missing the mark in its execution. It can even be accused of fuelling Muslim stereotypes of hijabi women, and bakers who won’t sell pork. And yet if we’re really honest we should ask whether these stereotypes are really propagated by Islamophobes or if it’s Muslim representatives around the globe who peddle them.

When was the last time we saw a group of hijab-wearing women supporting fellow Muslim women’s right to not wear the hijab in Muslim countries like Saudi Arabia and Iran, where they are attacked or criminalised for not doing so? How many Muslim clerics would be willing to embrace a pluralistic Muslim identity not dependent on theological adherence?

The Muslim Council of Britain’s first response to the murder of British shopkeeper Asad Shah, who was killed for blasphemy in Glasgow last month, was to excommunicate him for belonging to the Ahmadiyya Muslim community, and to highlight how the ‘pressure is mounting to describe this community as Muslim’. This is how the group claiming to represent ‘all Muslims’ reacts to a minority-sect Muslim being murdered by a majority-sect Muslim for Islam. But apparently it’s Charlie Hebdo’s caricatures and words that are oppressing the Muslims in the West. 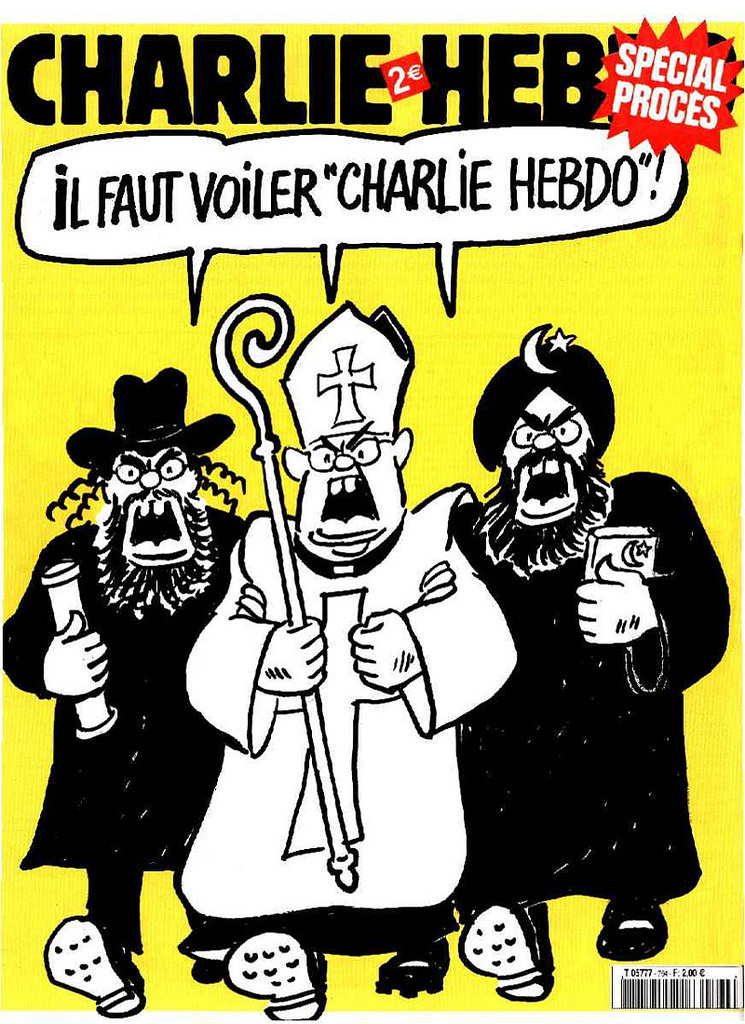 It is facing this reality that Charlie Hebdo’s editorial becomes all the more pertinent: How did we end up here?

How did we end up here, where a magazine’s words trigger more opinion-makers than murder over blasphemy?

How did we end up here, where satirical work is rigidly attributed the most bigoted interpretation, but scriptures fueling terrorism are endowed with plurality of versions?

How did we end up here, where there’s more consensus over Charlie Hebdo’s intentions than the Islamic State’s?

How did we end up here, where criticising religion has become right-wing?

Charlie Hebdo has been the staunchest critic of the National Front and the Catholic Church for nearly five decades. Like a true left-wing publication it has mocked, ridiculed and critiqued Western interventionism and France’s colonialist past, often attributed as the main cause behind the rise in extremism within Muslim communities.

But now that the publication has stepped forward and highlighted the Muslim community’s role in aggravating Islamist terrorism, and criticised apologists like Tariq Ramadan for a lack of collective self-reflection, the publication has rubberstamped itself as Islamophobic.

If treating Muslims as any other community in terms of accountability and responsibility is Islamophobic then the Muslim world could certainly do with more of it. What we definitely do not need is the trigger-happy sections of the left ready to feed the Islamists’ victim complex, and brandish labels of Islamophobia left, right and centre.

If Charlie Hebdo were Islamophobic, the liberal press in the Arab world wouldn’t be paying it tributes. Or maybe they’re Islamophobic as well.