These are the words uttered by college student Salma in the BBC 3 drama Murdered By My Father, as she warns her boyfriend to stay away before someone finds out that they are dating.

We have all been there, have we not ladies? Most of us, from South Asian or Middle Eastern backgrounds, where the notions of honour and shame are so important, have always been — and always will be — on our guards whenever we leave the house. Because no matter what you are doing, someone, somewhere, is always bound to catch you out and report you to your parents. Even when you least expect it. Even when what you are doing is entirely innocent it does not matter. Once word gets out it can blemish a reputation you must keep clean. Women will sometimes pay for this transgression with their lives.

Written by Vinay Patel, Murdered By My Father is a harrowing drama based on testimonials from survivors of ‘honour’ abuse. It tells the story of Salma (played fantastically by Kiran Sonia Sarwar), a young woman who lives on an estate with her widower father Shahzad (Adeel Akhtar) and younger brother Hassan (Reiss Jeram).

Like many girls of her age, Salma has a boyfriend, Imi (Mawaan Rizwan), except she has to keep it all a secret from her family and the wider community or else there will be hell to pay. Unfortunately for Salma, she is already promised to someone in marriage — the bland and unremarkable Haroon (Salman Akhtar). It is a painful reminder that her life is not hers, but simply on lease until the time comes for her family members, her community, to reclaim what was never hers. We belong to our fathers, brothers, husbands and the wider community. We are not individuals.

There is a scene in which Shahzad sees his daughter’s pink bra in the bathroom, a symbol that she is no longer a girl, but a woman, a sexual being who is a potential threat to his honour — that bullshit word that is a noose around most women’s necks.

“You carry all of us,” Shahzad explains to his daughter. “I get scared because when they look at you, they see me. You fail, I fail. When you’re safe, I’m safe. When you get married then I can die happy.” This type of emotional blackmail is often deployed as a tactic to ensure females toe the line. Shahzad is not portrayed as a monster, but a man who is trying to do right by both his family and the community. But the latter always wins in the end. It is important that we see this side of Shahzad first to show that these people can switch from loving parents to monsters who will take their children’s lives.

We see Salma and Imi meeting up secretly throughout the drama, savouring their moments of happiness because you know — as we all know painfully too well — that they can be snatched away from you in next to no time. On the day of her engagement, Salma is seen by her fiancé, kissing her boyfriend goodbye. The family and guests are allowed to enjoy their food, unaware of the storm that is about to be unleashed upon them. 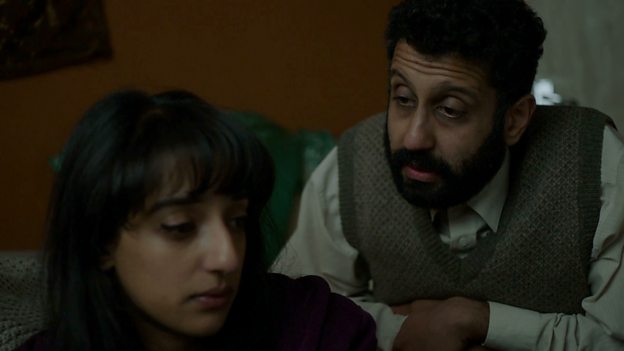 And, inevitably, Salma is shamed and dishonoured. The ‘shame’ is also on Shahzad. He has no honour left because he failed to keep his “slag” of a daughter in check. “Take care of your filth!” Haroon spits at the man who will no longer be his father-in-law.

Salma’s younger brother is caught in the middle, wanting to do right by both his father and his big sister, the same sister who doubled as a mother-figure. Younger siblings are routinely put in the cruel position of spying on their siblings, to make sure they’re not up to no good.

Don’t go back, you plead to her. But you remember the title of the drama and you almost wish it weren’t a prediction. Poor Hassan is sent to the shop by his father to buy some sweets, not realising it’s the last time he will see his loving big sister alive.

She naively assumes it will all be okay if she apologises. After all, isn’t that what parents are supposed to do — forgive their children when they make a mistake? But not this time. There will be no forgiveness.

“I did everything for you,” Shahzad shouts at her. “I never asked for anything in return — only that you listen to me in one thing.”

She replies: “You asked me for loads. You just don’t know that you’re doing it.”

In the end it’s not the blade, but her father’s own hands that take away her life. The hands that had once fed her, clothed her, and even embraced her, are the very hands that take away the life he helped create. Shahzad then tries to take his own life, perhaps repulsed by his actions or, more likely, unable to face the community again after ‘losing face’ over this ‘shame’.

What I loved about Salma’s character is that she continued to fight until the very end. She could easily have been portrayed as meek and submissive, and given in to her father’s demands by marrying someone whom she did not love — just for the sake of her ‘honour’. Others will not have had that choice.

I am not ashamed to admit that it made me cry for hours afterwards. I wept for the many, many girls and women whose lives are taken for the sake of ‘honour’. I wept for the girls who were forced to choose between their family or controlling their own destiny. I wept for those girls who could no longer fight back and submitted to the family pressure.

And I wept because I knew that Salma could easily have been me.

Murdered by My Father is available to watch on BBC iPlayer.

Iram Ramzan is the founder/editor of Sedaa.

One thought on “Murdered By My Father: A Review”