Yet another woman’s life has prematurely been taken in an ‘honour killing’.

Pakistani internet sensation Qandeel Baloch was strangled by her brother on Friday night while at her family home in Multan, Punjab.

After going on the run, her brother Waseem was later arrested. In his confession video, he expressed no regret. “I am proud of what I did. I drugged her first, then I killed her,” said Waseem.”She was bringing dishonor to our family.”

Qandeel’s posts were considered to be controversial in Pakistan. She rose to fame due to the sassy, and increasingly political, videos she posted on Facebook.

Her brother Waseem claims that having his friends share her pictures and video clips was “too much” for him and killing his sister was a better alternative than killing himself.

Both adored and reviled, Qandeel, who was buried on Sunday, referred to herself as a “modern day feminist” and had nearly 750,000 followers on Facebook.

It has brought out all the hypocrites. Mourning the loss of a woman they had probably thought of as a whore or disgrace to her family hours before her murder.

“They could have disowned her”, wrote one person under an article about her death. But even that is a problem. Don’t murder a women, for goodness sake. Just disown her and ostracise her for life. Much better, eh?

As for those telling me not to call it an ‘honour killing’. Yes I know there is no honour in killing. But this type of murder is carried out in the name of honour.

On the list of 145 countries featured in the World Economic Forum’s 2015 Gender Gap Report, Pakistan is second to last with regards to gender disparity.  According to the Independent Human Rights Commission of Pakistan, violence against women is rampant, with as many as 212 women being killed in the name of ‘honour’ in the first five months of 2016.

When I heard the news I wept all day long, because I am all too familiar with this concept of ‘honour’ that robbed Qandeel of her life.

Just read some of the comments on this piece. There’s no justification for murder, they start by saying. BUT. There’s always a ‘but’ isn’t there?

I remember worrying for her safety after hearing the news that she had posted a video with Mufti Abdul Qavi in a hotel room. I wondered, how is this woman still alive in Pakistan doing what she does?

Where is that mufti now? He claimed that Qandeel’s death is a sobering lesson for those who mock clerics. Yet it is perfectly fine for these clerics to meet women alone in a hotel room and offer to marry them. Qandeel also claimed that he tried to hug and kiss her. Police have announced that Mufti Qavi would be included in her murder investigation. But I don’t see any women rounding up to kill him in the name of honour.

Whatever you think of Qandeel, at least she didn’t pretend to be someone she was not. Our societies have raised us to be liars and hypocrites. We can’t do what we want openly so we do it secretly. The worst culprits are religious men such as Mufti Qavi.

Pakistani men (and indeed men from many societies around the world) constantly police women’s minds and bodies. They are terrified of what might happen if women start thinking for themselves and behaving how they want to.

For Qandeel was not just murdered by her brother. She was murdered by them all; her society and nation.

And unfortunately there are women who propagate these beliefs and practices, defending Qandeel’s murder. 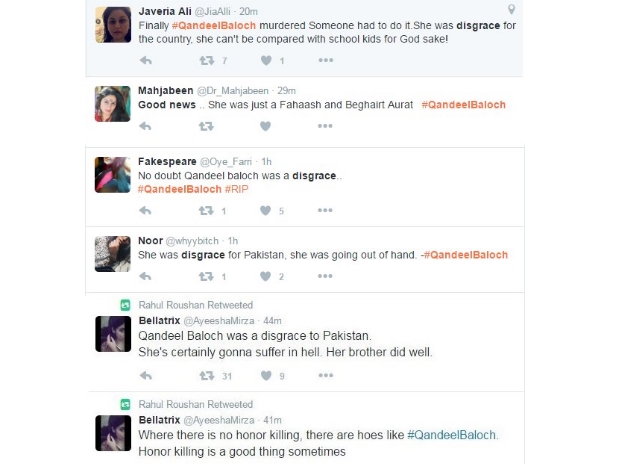 Murder is the same as a music video? And then we wonder why honor killings continue. This coming from a woman! pic.twitter.com/QnQvAdgm6m

This woman clearly does not realise the irony of her words. She is against honour killings but against ‘bey-ghairat’ (shameless), yet ghairat (shame) is the name in which this type of brutality occurs. Shaming Qandeel’s lifestyle choices are exactly what led to her murder.

They say she deserved it because she was provocative. But let us not forget that women can be killed for things that we would deem almost trivial here in the West — going out at night with friends, having a boyfriend, marrying someone whom you love, wearing what you want.

We are constantly watched, monitored and regulated. If we step out of the line we pay the price.

We can’t dress a certain way because it’s ‘disrespectful’ or ‘unIslamic’.

We can’t go out late because that’s not what ‘good girls’ do. We’re not like those  gori (white) women who have no honour. We have to say where we’re going, with whom, why we’re going out and what time we’ll return.

Our male counterparts get to do whatever the hell they want with barely any repercussions. When was the last time you heard of a man being killed by his sister, mother or wife in the name of honour?

And this problem is not just restricted to the east. Even here in the west, though we are free in theory the reality is different.

Very few people understand just what it’s like to live a life where, every time you step out of the house, you are worried that someone, somewhere, will see you. And they will, believe me. Your family has eyes and ears everywhere.

Even women who seem free on the surface are suffering. They might have careers and they could even be financially well off, but they’re controlled in other ways.

I’m sick of this. Yet we accept it or tolerate it quietly because, well, that’s what women have to do. For how much longer? For how long must we continue to suffer mentally, emotionally and physically, simply because we’re women and it’s seen as ok?

How do you stand your ground when the odds are stacked against you. You’re standing up to your parents, extended family, the ‘community’ and wider society. Then there’s us. On our own.

We have one life and it’s being wasted away. Be good, they tell us, and we’ll get our reward in the afterlife. A clever way of ensuring we stay in line because, let’s face it, crossing your family is one thing but crossing the Almighty? No thanks. So we continue to suffer in silence.

It’s always women like Qandeel who apparently are a disgrace to their families or their country, but never the men who leer at them or murder them.

We’re labelled whores, goris, beghairat (shameless), coconuts. A man is not a whore — he’s just a man, exercising his rights.

“Men can go out and have shit on their faces but still sit at the dinner table,” one Pakistani woman told me. “But you’re a girl, it’s different.”

Our family honour rests on our bodies; it is a terrible burden to bear.

“I will bounce back,” she said, adding that she wanted to inspire women who have been “treated badly and dominated by society.”

Sadly she did not and paid with her life. But all over social media, people are speaking up, condemning this murder.

I implore everyone out there, both men and women, please don’t let Qandeel Baloch die in vain.

Because one day the ‘honour brigade’ might come for you too. And there will be no one left to speak up.

Iram Ramzan is a journalist based in Greater Manchester and the founder and editor of Sedaa. Visit her blog and follow her on Twitter .