Imran Khan is no stranger to controversy. Over the years, the Pakistani prime minister has come under fire for making a number of ill-judged comments that have sparked a backlash.

During a recent question-and-answer interview with the public on live television, the former cricket captain was asked what steps his government had taken to prevent sexual abuse.

After denouncing crimes against women and children, he claimed sexual violence was a result of “increasing obscenity”, and a product of India, the west and Hollywood movies.

The prime minister also instructed women in Pakistan to remove “temptation” because “not everyone has willpower”. He said women should observe purdah – a term referring to women wearing modest clothes around men or segregation between sexes.

Unsurprisingly, his comments were met with fierce condemnation on social media from various women’s rights groups. Among those critics was his first ex-wife and mother of his two sons, Jemima Goldsmith, who tweeted out a passage from the Quran: ‘“Say to the believing men that they restrain their eyes and guard their private parts”… The onus is on men.’

In another tweet, she added: ‘The Imran I knew used to say, “Put a veil on the man’s eyes not on the woman”.’

“Say to the believing men that they restrain their eyes and guard their private parts." Quran 24:31

The onus is on men. https://t.co/StkKE3HIPM

Unfortunately, Khan has a track record of making chauvinistic statements – surprising for a man who was educated at a prestigious secondary school in the UK and then at Oxford University. In 2018, for example, he said he disagreed with the Western feminist movement, because it has contributed to “degenerating” motherhood.

Ironically, Khan also had difficulty in resisting temptation when he was younger; indeed, he was often pictured in London’s nightclubs, with a variety of glamorous women on his arms, relishing his reputation as a playboy.

Now, perhaps in an attempt to portray himself as a reformed character, he is making such statements in order to appeal to his core voters, as well as to gain legitimacy from the religious conservatives in his country.

Therefore, his recent comments on rape should be seen as nothing more than a thinly disguised effort to conceal his inept leadership and his government’s incompetency to tackle the issue of child sexual exploitation that is rampant in Pakistan.

The country ranks among the worst places in the world for gender equality. Sexual abuse and ‘honour’ killings are common. There are shockingly low conviction rates in rape and domestic abuse cases. It was only until 2006, under the Islamic Hudood Ordinance, that a woman had to provide four witnesses to report a rape – failing which she would be tried as an ‘adulterer’.

Violence against women cuts deep into the history of these societies, where religion is invoked to demonstrate how women are inferior and men are the main source of moral guidance.

On the one hand, religious clerics say men and women are equal in the eyes of God, and then use that as a caveat to deny women the same equality. The equality is merely in terms of spirituality, which hardly applies in worldly affairs.

As well as that, politically powerful people (almost always men) will often cosy up to religious clerics, who then overtly endorse the patriarchal status quo to strengthen their hold on the masses.

And powerful Muslim men like Imran Khan unabashedly cite religious teachings and traditions to excuse men for their inappropriate or criminal behaviour, and blame women for all social ills.

This is often bolstered by certain teachings of Islam, which endorse injustices against women, such as: wife beating, the concept of guardianship over women, child marriage, instant divorce (where men need only utter “I divorce you” three times in order to divorce their wife), polygamy, the imposition of hijab – and much more.

Women not conforming to the toxic modesty standards are deprived of their agency, ostracised and – in the worst case scenario – killed in the name of honour. And if they dare to speak out against such unreasonable laws and practices, they are labelled as “vulgar” and “whore”.

This could be seen in the recent Aurat March (women’s march) in Pakistan – when women took to the streets to demand their basic human rights, they faced backlash from religious extremists, who slandered the organisers for “promoting vulgarity”. Female participants were falsely accused of chanting “blasphemous slogans” and religious references were cited to justify these hideous tactics. 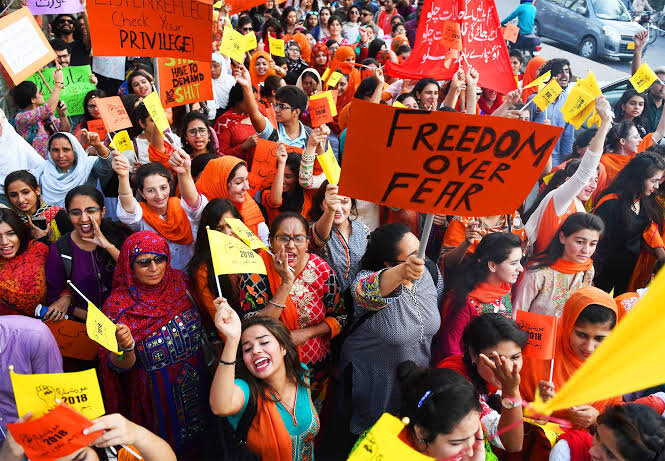 It was ludicrous for Khan to claim that the Islamic concept of purdah can avoid social harms.  In Muslim majority countries such as  Egypt, Iraq, Afghanistan, Iran and, indeed, Pakistan, where most women do dress modesty, they still face sexual assaults. The truth is that a mere cloth cannot – and will not – stop some men from violating women’s rights, who seem to behave with impunity.

So in these circumstances, it is highly disingenuous to provide references from a religion in defence of women’s rights, when that same religion is also used to justify inequalities and violence against women.

I don’t recall anyone in the west invoking Christianity or any other religion to condemn horrific crimes against women. In contrast, women’s rights in the west have always been discussed in terms of general human rights that demand equality and justice for everyone regardless of their gender, sexual orientation, race, or ethnicity.

As well meaning as Jemima’s intervention was, it doesn’t help that when Muslim women’s rights are discussed, people tend to invoke Islamic scriptures to define how and to what extent rights can be afforded to those women; Khan used Islam to blame women for the crimes committed against them.

The notions of modesty and religious freedom have been weaponised to shut down debate around this toxic culture that fosters abuse against women. This needs to be challenged head-on.

Women in Muslim societies are often left helpless, traumatised and ostracised if they dare to speak up. Those of us who do have freedom of speech need to show unconditional solidarity and amplify the concerns of the voiceless.

It is therefore a shame when even a man like Imran Khan, educated in the West, and elected to power on the promise that he would create a ‘New Pakistan’, seems determined to maintain the status quo.

Khadija Khan is a journalist and commentator based in the UK. You can follow her on Twitter.