This is a cross-post from The Nation

Two very significant recent events have evoked identically counter-productive, nay self-defeating, reactions from Pakistani and global Muslims respectively. The Jamaat-e-Islaami led religious parties’ meeting in Mansoora unanimously condemned the Women Protection Act as ‘un-Islamic’ last week, while the Brussels attacks on Tuesday killed 34 people and injured over 200. Both events exhibit the ugliest shades of Islamism, and both were met with defensiveness about Islam from various sections.

As has become the norm, every global act of jihadist terrorism is received with the now standard Muslim reaction of the attack having ‘nothing to do with Islam’. This simplistic denialism reflects a complete lack of understanding of the difference between Islam – a doctrinal mélange of beliefs, traditions, cultures and ways of life – and Islamism – the desire to impose a specific version of Islam throughout the world or a state. While uniting against radical Islamism is increasingly becoming an existential question for the entire world, many of us Muslims are more focused on being offended over the fact that the term is prefixed by ‘Islam’.

The religious groups that united in Mansoora on March 15 are all Islamist parties – a commonsensical term rarely used to call a spade a spade in Pakistan. All of them uphold the political aspects of Islam, which includes the imposition of Shariah law and governing the state – and eventually the world – according to Islamic jurisprudence from the 7th century.

According to the Islamists in Mansoora, which included Sami-ul-Haq and Hafiz Saeed – two prominent names of South Asian jihadism – criminalising husband beating his wife, giving women judicial equality, or outlawing child marriages contradicts the Shariah law. While it was heartwarming to see protests against the mullahs’ denunciation of the law, both on ground and on social media, the protestors treaded the precarious territory of teaching the Islamists about Islam.

To suggest that views expressed at the Mansoora moot contradict Islam would be to question Muslims’ understanding of their religion over the past 14 centuries.

The problem is that it’s the year 2016 in which the Council of Islamic Ideology (CII) – a superfluous entity that should’ve been shunned long ago – repudiates progressive bills saying that wife-beating is sanctioned by the Quran, while child marriage is Sunnah. And it is facing this reality that we need to address the elephant in the room. 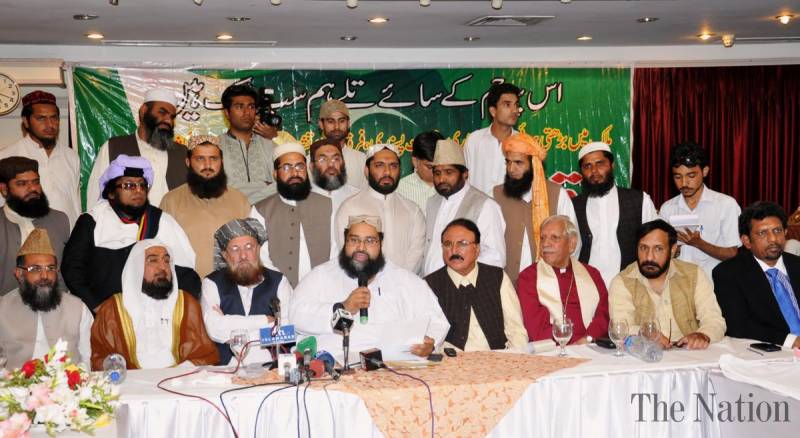 To claim that the CII, JI and Jamiat Ulema-e-Islam-Fazl (JUI-F) do not understand Islam, is a very dangerous game to play. For, it implies that in case their assertions do actually hold theological water the rest of us should accept antediluvian ideas.

Muslim-majority countries like Kosovo, Bosnia, Albania, Azerbaijan and Turkey (at least until recently) are examples of progressive states where Islam and modernity coexist. But more crucially, what also exists in these states is a pluralistic identity, where being a Muslim is not considered synonymous with unflinching adherence to Islamic theology, or even with religious belief at all.

The solution, hence, is neither rejecting religion, nor excommunicating the Islamists, but simply differentiating between Islam and Muslims, while simultaneously propagating a moderate version of the religion, which shelves outdated Islamic ideas, instead of denying their existence. More crucially, there needs to be a firm stand against imposition of any version of Islam, which can only be founded upon the idea that none of the versions holds monopoly over truth or is superlative enough to govern all of mankind.

When Islamism takes up a radical form it evolves into jihadism, which self-manifested in Brussels on Tuesday. Again, trying to explain what ‘true Islam’ is to the jihadists, or more criminally to the victims of terror, is not only inopportune, it immediately creates a divide between ‘us’ and ‘them’ – both of whom have been victims of jihadist terror. In fact, as is now well known, jihadism has killed more Muslims than non-Muslims. But we tend to ‘cash in’ on this fact to apostatise the jihadists and shield Islam, instead of using it to express global solidarity.

Every Muslim killed by jihadist organisations has been deemed a non-Muslim – an act that we involuntarily reciprocate. This underscores the aforementioned need to embrace pluralism in the Muslim identity. Because anyone who deems a group, or an individual, unworthy of self-identifying as a Muslim, inadvertently bolsters the idea of a ‘true Islam’, with its most radical proponents violently hijacking it. The very idea that there is a ‘true’ version – no matter how tolerant a particular version might be – gives credence to the idea of a monolithic Muslim world, which is anathema to Islamic progression and gasoline for anti-Muslim bigotry.

When we don’t know how to differentiate between Islam and Islamism, the anti-Muslim jingoists won’t bother to do it for us. This gives rise to the opportunistic pied pipers like Donald Trump, who exploit unaddressed concerns, to further aggravate growing fault-lines.

Once we establish the difference between Muslims, Islam and Islamism, only then can we expect others to distinguish between these. The non-Muslims are under no obligation to study ‘true Islam’ before understanding whether an act was Islamic or not. It is the Muslims whose actions will represent Islam and the Muslim world. And as things stand, the two most prominent Muslim groups are jihadists, and the moderates busy defending Islam.