When I was young I was horribly mutated in a madrassa experiment gone wrong. I became a Half-Muslim, Half-Atheist replicant. At least that’s one theory.

The Internet has come up with many odd comments like this, which as well as being entertaining, highlight one of the challenges of interfaith engagement online – namely, being seen as not fully part of the group you claim to be from.

Defending one group or a minority within a minority invariably means invoking the ire or mistrust of another group. Some are under the impression that by caring about another group’s suffering, you are abandoning those closer to home. Some even go as far as dismissing the problems affecting another group because they judge them to be less worthy than their group’s concerns.

This logic baffles me because telling a person who is suffering, that someone else has worse problems, does nothing to help them. It is about as helpful as using a rubber chicken to put out a house fire. It also introduces or increases the concept of shaming and silencing victims which only exacerbates existing problems, many of which may already involve shaming and silencing.

While this may sound incredibly disheartening, I think we underestimate our capacity to empathise with fellow human beings and our ability to care about multiple issues simultaneously. However, while human potential for compassion may be endless, confronting problems in our communities can be time consuming and emotionally draining.

These are the limiting factors that prevent us from taking on every cause and means that, for practical reasons, we have to choose our battles. We cannot address every issue within the same breath and instead we need to focus on one issue at a time. This can be rather difficult online when many people, with different or conflicting agendas, seek attention for their causes.

When asked to describe the difficulties on interfaith engagement online, a writer (E. A. Sofia) said:

Often this ‘what about’ deflective tactic is a form of defensive posturing, a way of diverting attention away from the problematic issues within a community. This form of over-defensiveness can be a stumbling block for interfaith progress since there needs to be honesty and openness about the negative aspects of religion if we want to make headway into resolving them. 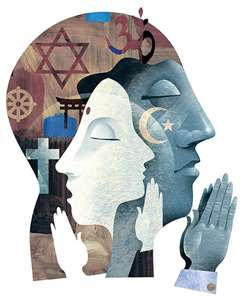 Defensive barriers have, in part, been bolstered by the use of the internet. While the internet has been an incredible tool for bringing people from all over the world together with the click of a button, it also has the paradoxical tendency to highlight and intensify existing divisions if left unchecked. By linking up with hundreds of members of your religious or non-religious group on social media, we can easily fall into a hive mentality by isolating ourselves from other perspectives and defending members of the group simply because they share the same label.

One particular action that often causes groups to close rank is when a member calls out bad behaviour or practises from within it. While it may be derisively called ‘airing dirty laundry in public’ and those who do it may be dismissed as troublemakers, it is often the most effective way of stimulating real discussion and eventually bringing about positive changes.

It is crucial for these discussions on unpopular topics to be out in the open for several reasons. Firstly, it makes it harder for the issues to be ignored. Secondly, public debate also allows input from outside members who share similar concerns. Finally, and perhaps most importantly, hearing others speaking up encourages those who may feel they are alone or helpless in their struggle against bigotry, harmful practices, or problematic theology.

Making the distinction between criticism and bigotry can be tough because there are those who benefit from actively blurring the lines between the two. There will always be individuals who would attempt to use our words of criticism to fuel their own prejudice or agenda against a certain religious or ethnic group. Rather than remaining silent out of fear that our words will be appropriated, we should instead aim to be as nuanced as possible and be clear from the onset that we oppose bigotry, racism, or the demonisation of a whole group of people in no uncertain terms.

Religious texts often face criticism, and rightly so, for passages containing or seeming to encourage violence, especially those passages which are used by certain adherents as justification for abuse. It is important not to conflate this criticism of religious texts or practises with bigotry since the murking of the theological waters, whether intentional or accidental, often ends up protecting those who abuse religion for their own means while conveniently hushing up dissenters. Ideas and beliefs are there to be critiqued and we should protect that right, even if the ideas and beliefs being critiqued are ones we ourselves cherish.

Those engaged in interfaith or activism often come up against hostility, even from opposing sides. For instance, I often find myself stuck between the rock and a hard place of being accused of being too Muslim by those with an anti-Muslim agenda and no where near Muslim enough by Muslims who’d rather I kept schtum about our community’s issues. In fact, it is not uncommon for a person critiquing their own religion or its practices to find themselves being falsely accused of being duplicitous or fake.

Sadly, many would much rather attempt to discredit critics than engage honestly with their ideas. However, being critical of religious texts or practices does not make a religious person any less sincere in their beliefs. For many, including myself, social reform and the fight for justice and equality are crucial aspects of their faith.

Although it may be tough, sincere interfaith engagement can encourage believers to examine and be critical of their own texts as opposed to glossing over these difficult topics for the sake of superficial unity. Effective engagement also allows those who identify as atheists, humanists, and secularists to engage with people of faith and work alongside them to defend human rights and freedoms as well as celebrating the common good that unites us.

Ultimately, interfaith engagement, particularly online, can provide much needed space and opportunity to ask difficult questions and receive support from other religious or secular groups in order to tackle problems within and between diverse communities.

Sarah Ager is an English teacher who lives in Bologna, Italy. Since 2013, Sarah has curated an annual Interfaith Ramadan blog where people of faith and none are invited to write about interfaith, intrafaith, and inclusion in society, with a particular focus on taboo subjects and individuals often neglected by mainstream interfaith dialogue.