The announcement by Amir Khan on Twitter that his marriage was over was shocking enough. But then he followed it up with a series of even more bizarre, disturbing and downright scandalous tweets in which he accused his now estranged wife  Faryal Makhdoom of not only being a gold digger, but also of cheating on him with a fellow boxer, Anthony Joshua. Khan’s last tweet reads:

“Mans (sic) like (Anthony) Joshua can have my left overs” 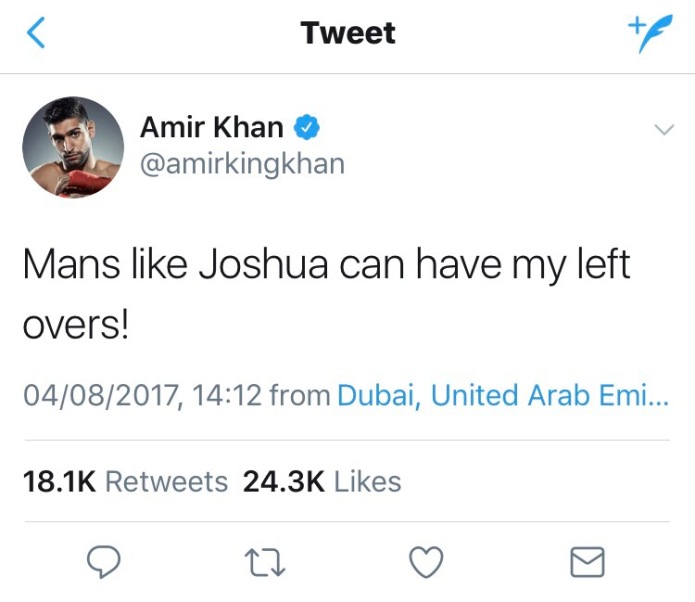 Calling the mother of your child ‘my left overs’? What is she, a meal that you’ve had enough of and don’t even want to take home in a doggy bag?

Naturally, Makhdoom responded with a series of tweets of her own, denying Khan’s accusations that she had cheated on him, accusing him of being a 30 year old baby and claiming that she had stood by him even after unsavoury evidence merged of Khan cheating on her shortly after their marriage in 2013. Soon after, Anthony Joshua responded from his own account, denying that Makhdoom and he had ever even met.

What has been interesting is the reaction to this whole sorry saga, from many mocking Khan for his tweets, praising Joshua for his sense of humour and, unbelievably, vilifying Makhdoom.

Here are some choice examples: 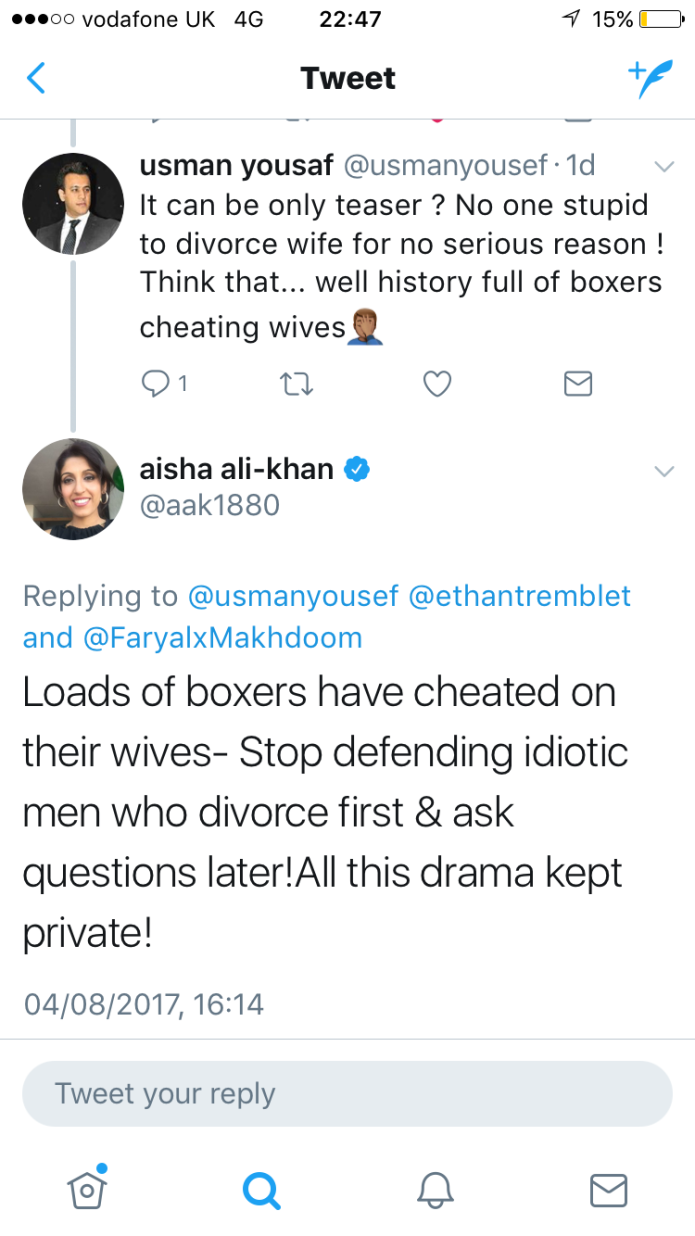 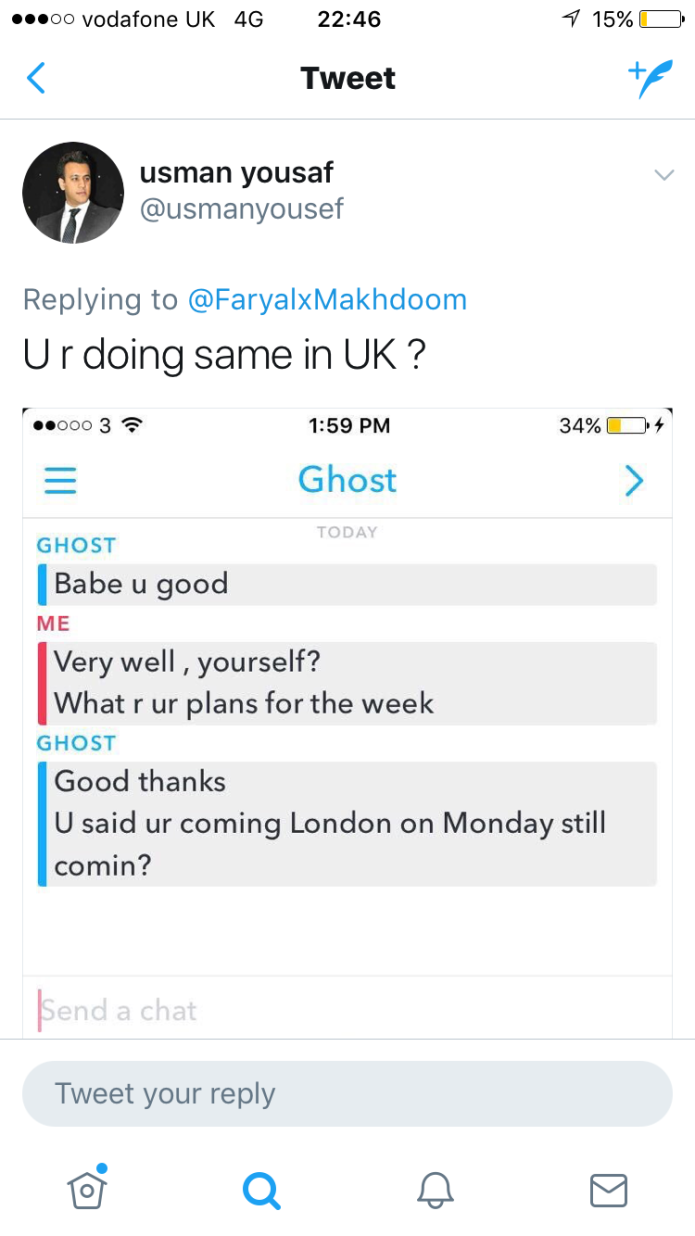 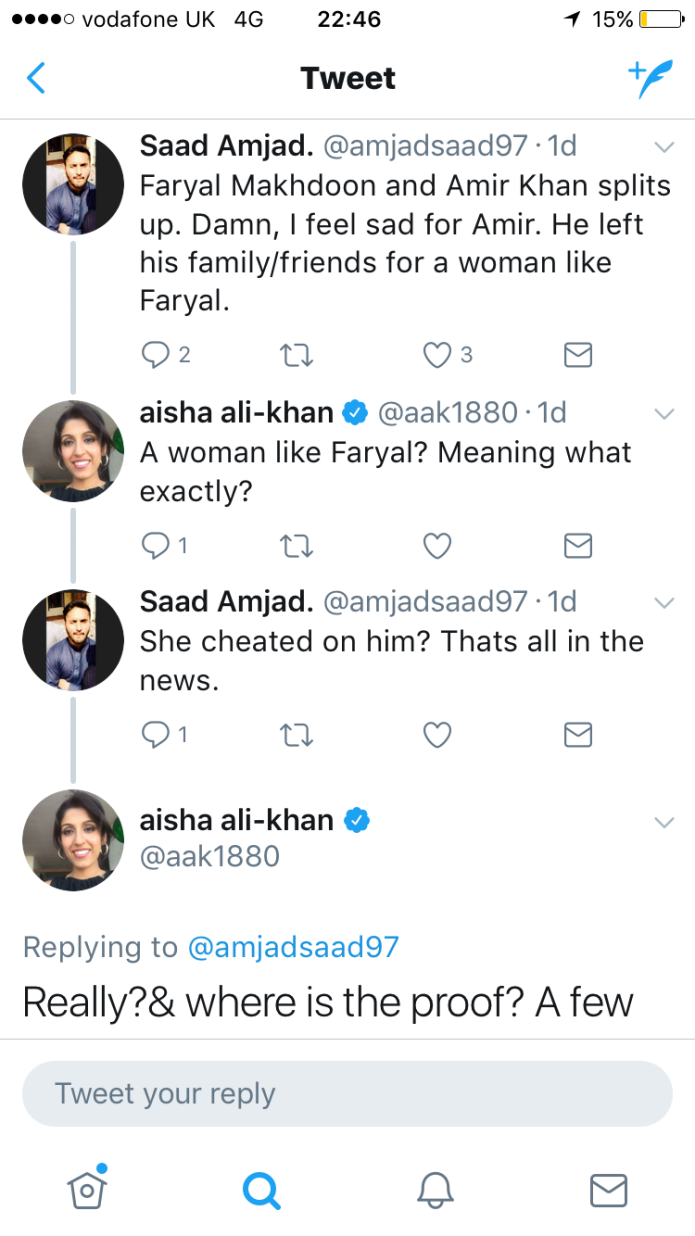 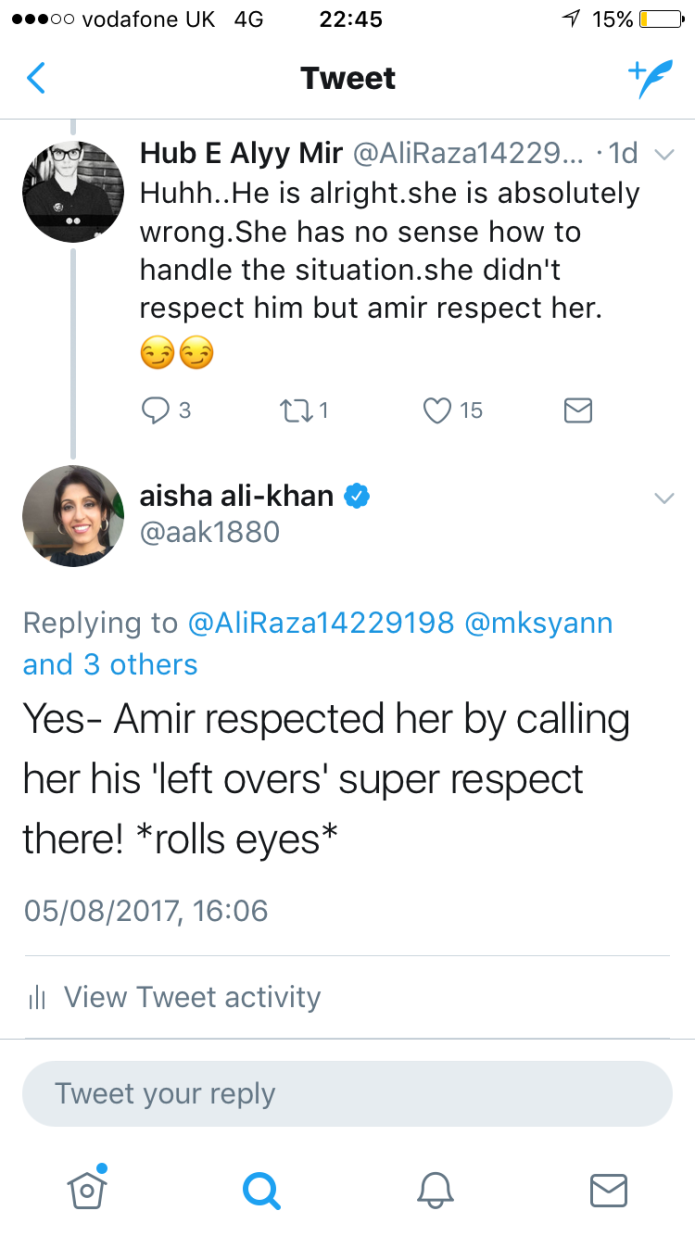 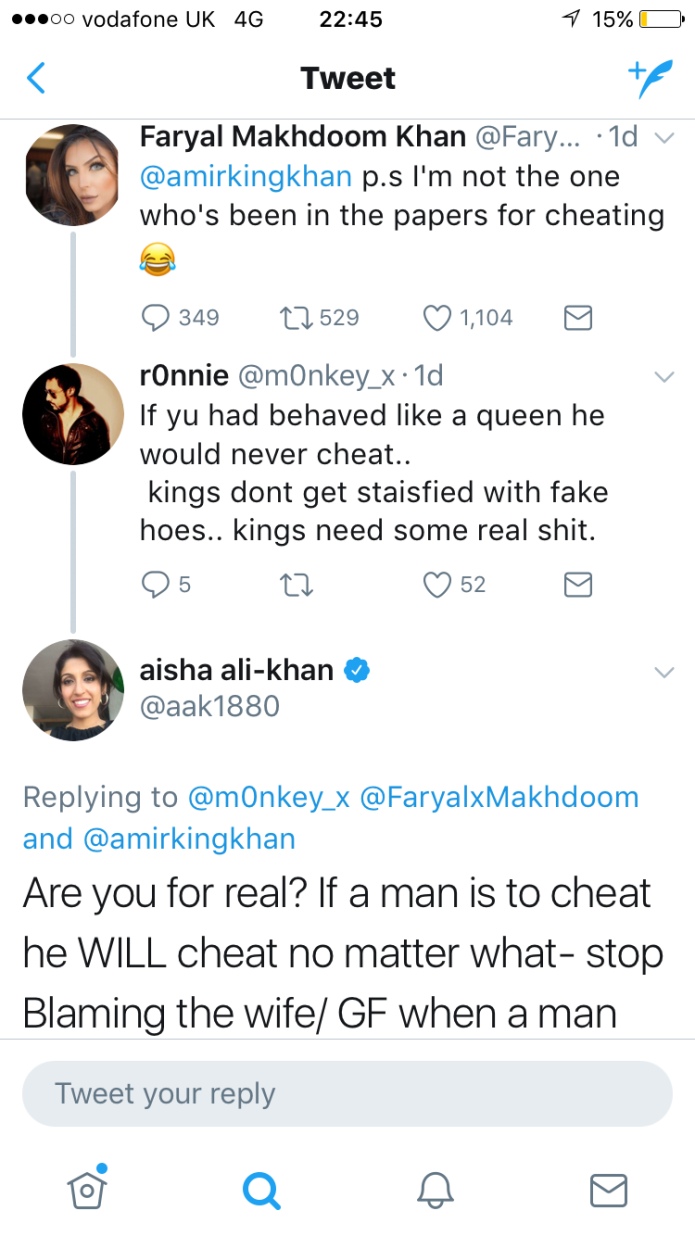 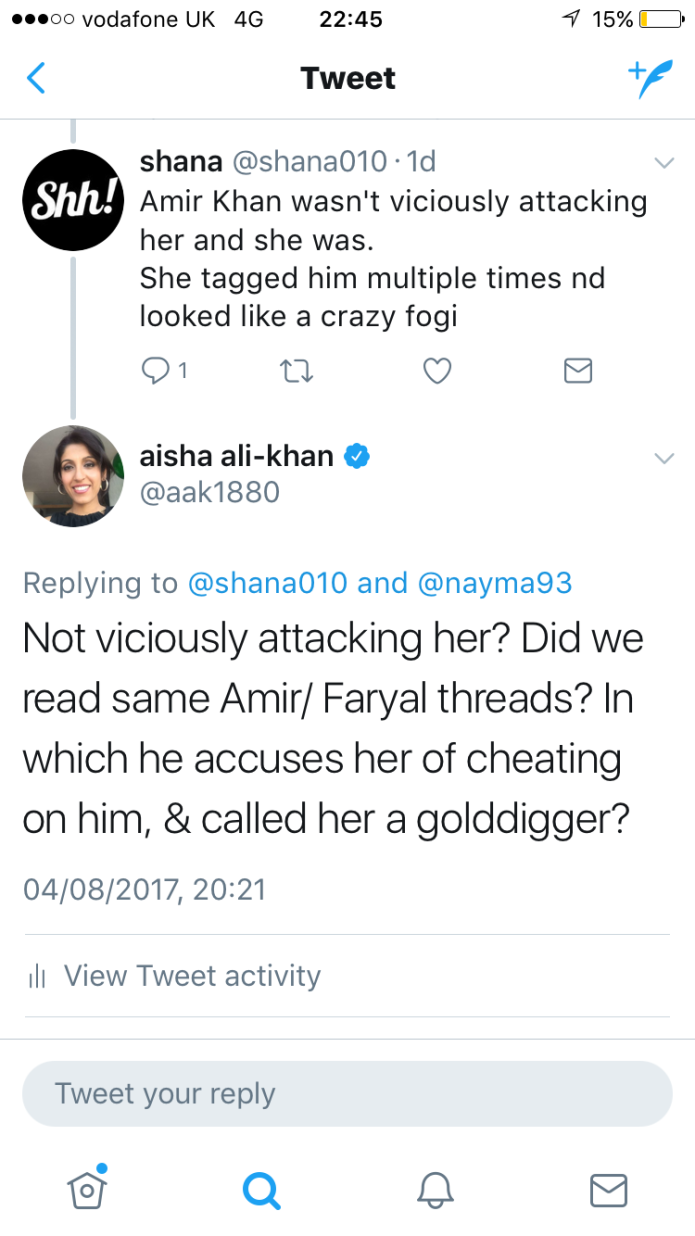 “if yu had behaved like a queen he would never cheat..

“huhh..He is alright.she is absolutely wrong.She has no sense how to handle the situation.she didn’t respect him but amir respect her.”

“Amir Khan wasn’t viciously attacking her and she was.

I have been truly spoilt for choice when it came to choosing examples for this blog post; not surprisingly, most of the attacks against Makhdoom were coming from the Asian community, and especially from men.

Some even went on to accuse her of trying to make a name for herself on the back of Khan’s fame;

“Whats ur identity nobody knows you without amir Khan ur nothing”

Er, what did you expect her to do; sit at home and make handi roti like a dutiful Muslim wife while Khan played the field? The fact that Makhdoom has established a small but successful business of her own should be applauded. After all, she is trying to be self-sufficient and to stand on her own two feet rather than clinging onto the coat tails of her husband and his purse strings.

Furthermore, why is it that women are immediately seen as a target once a marriage break downs but no one questions the man even when he has been seen with his pants down via skype the world over? Where was the vitriol and hatred towards Khan when allegations of his own cheating scandals emerged?

This sheer hypocrisy and double standards may come as a surprise to many but is unfortunately the norm in the communities that Khan, Makhdoom and I hail from.

The wife bears everything with a smile, turns the other cheek if her husband has done anything ‘wrong’ and generally tries to keep the family unit together in the face of numerous obstacles and interferences. But as soon as the husband even suspects any hint of wrong doing then all hell will break lose and all toys will be well and truly thrown out of the pram like mini heat seeking missiles!

Whenever there has been any marital strife between husband and wife, it is always the wives who have gotten the lion’s share of the blame. So your husband is being violent or abusive? It must be because you can’t control your tongue. Husband won’t let you go into town on your own? You will just end up wasting his hard earned cash. Husband having an affair? You must be frigid, inexperienced or too consumed with your own life to give him any attention, even if that means you’re raising his children, cooking, cleaning and looking after his family members too!

The internet and social media now means that there is an added element of disseminating the news further and wider than ever before, thus maximising the humiliation for the wife. This matter could have and should have been resolved behind closed doors. As it stands now, Khan’s actions have resulted in Makhdoom being a target for all kinds of mischief both online and in the real world. So much for the ‘parda’ (veil) and ‘libaas’ (garment/ protection) that Islam states should exist between husband and wife.

Now reports have emerged that Khan has divorced Makhdoom, via the tried and trusted method of SMS text. Very much like the divorce issued by Pakistani politician and former cricketer Imran Khan to his second wife Reham Khan, with Reham only receiving the text after she had landed in the UK after a long haul flight, this seems the preferred cowards way out of a marriage.

If that is the case, I am even more disappointed in Khan. As a positive role model for young boys and girls the world over due to his position as a world famous athlete and now campaigner for those in need of charity, some-one should perhaps tell Amir Khan that charity begins at home, with his wife and daughter. 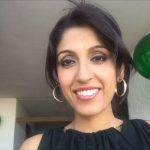