This year, March 20th marked the first day of the solar calendar, the first day of spring. In Iran and across communities in Central Asia and the Middle East, as has been done for over 3,000 years, people of all races and religions celebrated the New Year with rituals and symbols of spring, family and food.  Reflecting on the past year, there has been a mass confrontation between the citizens and government, from across Iranian society and particularly from women, who have demonstrated a re-invigoration in the courage and boldness of their protests.

On December 27 2017, Vida Movahed made a gesture in silent protest which was to become viral. She stood on a utility box on Revolution Street in Tehran, removed her headscarf, tied it to a stick and silently waved it like a flag. The compulsory clothing regulations in Iran require all women from puberty to wear a hijab.

The protest follows what has become known as White Wednesday, a movement ignited by the My Stealthy Freedom campaign against mandatory hijab for women. Women take photos and videos of themselves wearing white headscarves as a symbol of protest, sometimes daring to remove their headscarves completely. Soon after Vida’s protest (and following her arrest and subsequent month-long disappearance) women across Iran followed suit and stood on platforms, in public, their heads bare and silently waving their headscarves.

Their protests became viral on social media, with hashtags in Farsi captioning them as ‘The Girls of Revolution Street’.  From a foreign eye or one unfamiliar with Iran, looking at the pictures of women, often on the side of busy roads with cars and people passing by, the gesture can almost seem inadequate or, as the Iranian Supreme Leader Khamenei described them, “insignificant”.

But the women in Iran know very well what these seemingly small acts of defiance can mean; at least 30 men and women were arrested following the peaceful protests, with some convicted and sentenced to prison on charges such as “encouraging people to engage in corruption by removing the hijab in public” and “committing a forbidden act in public space”.

The Girls of Revolution Street stood publicly and risked their freedom despite knowing the potential arrests that would follow after bruising the delicate ‘honour’ of the regime.  And why would women who do wear hijab for their personal beliefs stand on platforms and protest too?

The Girls of Revolution Street and the countless women, who have stood in protest since the 1979 revolution, draw a distinct line between religious edicts and an individual’s right to choose. They protest not the hijab, but the compulsion, and the oppression and infantilisation of women. The freedom to choose what one wears, what one thinks and feels, is a desire that knows no geographical bounds.  And the women of Iran want to be free too.

If this past year for women in the ‘West’ was a year of #MeToo and of recognising and re-establishing boundaries, then for women in the ‘East’ it continued to be one of struggle and protest for their fundamental human rights. In the ‘West’ (although Nawal El Saadawi would say according to whom?), we often struggle with discussions of identity, religion and how these interplay with human rights and, particularly, women’s rights.

We can look to the protests such as the Girls of Revolution Street not just for inspiration but also for clarity. Clarity on the universality of human rights, that women everywhere and within every perceived culture or religion demand the same freedoms.  But also it demonstrates the need of the clear separation between religion and society as a whole; that no woman is a symbol or archetype, but an individual, who may have a complex relationship with their god or none at all.

We should, in this new year, join the Girls of Revolution Street loudly in their slogans and in their cries for universal human rights. 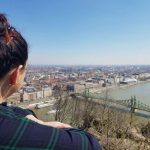 Atoosa is a law student and works for a human rights charity. She is interested in human rights law and issues of security, secularism and religion. Follow her on Twitter.