The pivotal moment came for me when I decided I wanted to travel more and secondly undertake some aid work. Like most people, I fancied a partner in crime so waited around to see who would be free to join me.

Back then, the majority of my close friends came from the same background as me; Pakistani and Muslim. Culturally, it’s still a bit of a fight for single women to travel, particularly to some of the places I was keen to see. Fed up of waiting around, I opted to go lone style and it’s worked out well for me ever since.

For a long time, I’ve blamed culture and male dominance for the lack of freedom Asian/Muslim women have. I don’t really consider myself a feminist although the outside perspective may appear to many that I am. I’m simply passionate about women’s rights and empowerment of women particularly through education. My views on blame recently changed somewhat; is the problem actually… us? Controversial! I’m not saying everyone in my culture is discontent with the way they live their lives but this piece is aimed at those who are and there are many.

Asian culture spouts the same old line to us women: “You can do whatever you want when you get married.” By now, if you’re in your 30s and have never been married, I’m hoping you realise there is little truth to that statement. And if you’re in your 20s and believe that line, sorry but I need to burst your bubble. You won’t live life the way you imagined after you get married, you may well settle into a marital bliss but there will be a fair amount of expectation to compromise on your ambitions.

Since coming back from Palestine, I’ve been met with a fair amount of shock that I went it alone:

“I would love to do something like that but would never be allowed”;

“What did your parents say?”

“Take me next time, maybe you can talk to my parents”.

These aren’t lines given to me by teenage girls, but grown 30-something-year-old women. It got me thinking as to why we aren’t challenging the way we live. Why aren’t women taking more control of their lives?

Maybe it has been easier for me as someone who was married and lived life outside the family home. I’m treated like a grown woman. I do my own thing, I’m not under my parent’s guardianship as it were. I also never reverted back to that traditional way of asking for permission in what I want to do. As my brother told a friend of his, “Once my sister makes up her mind, she goes with it”. But I do believe that even if I had never been married and grown up a bit, I would do my own thing and would have fought for it if required.

It comes with its own challenges, no doubt about that. To break away from most expectations requires an element of strength for the fight about to come your way. It’s easier to just stay quiet and carry on. It’s that which has got me thinking that, really, the problem is us. Scared of the religious doctrine that will be churned out. Scared of what people will think. Scared of the whispers from extended family. We’re too scared to make the changes we want to be.

But if we don’t do it then who exactly will? 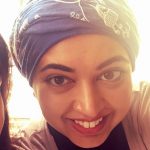 Faiza Yousaf resides in Scotland and describes herself as a hopeful humanitarian. She first started writing publicly during her divorce to encourage Muslim women to step away from the stereotypes of shame.

She enjoys pushing boundaries in a bid to force difficult discussions which in her eyes are much needed in the community she comes from. Her latest pieces focus on her aid work and travel through Palestine.