The late polemicist Christopher Hitchens once described conspiracy theories as the “exhaust fumes of democracy: the unavoidable result of a large amount of information circulating among a large number of people.”

The current pandemic has brought out conspiracy theorists in droves and their theories are as outlandish as ever. Our disassociation with science and fascination with celebrities means that at times like these people will risk their lives but will still not believe scientific fact. A study conducted by researchers at the Reuters Institute at Oxford University, found that social media posts by politicians, celebrities and influencers were the most common means of engagement with coronavirus falsehoods.

Here is a cool info-graphic I found (the provenance of which I am not aware), that in my opinion kind of explains this: 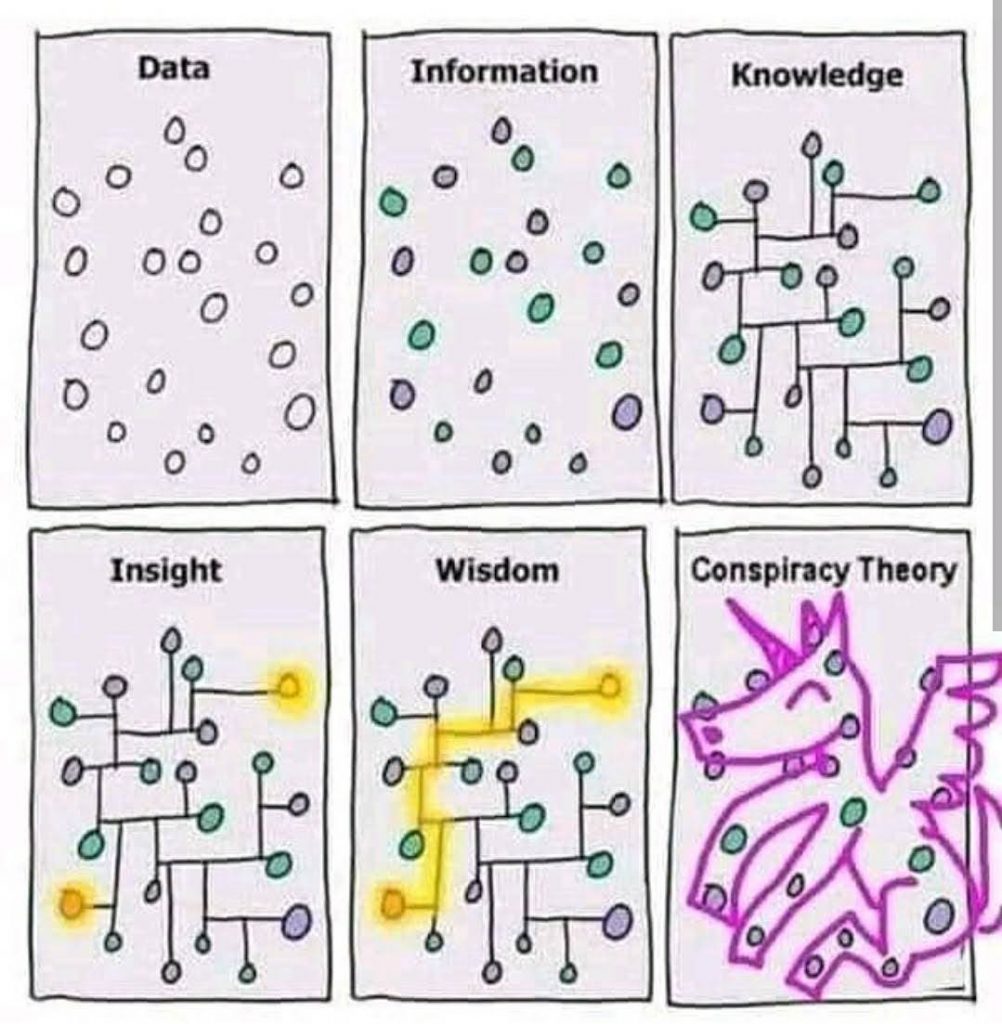 Conspiracy theories resonate with us because they serve as a defence mechanism against scary and inexplicable events. In the age of social media, they have become a cultural phenomenon, establishing communities within one’s platform of choice – communities that are comforting and from which it is difficult to separate.

Education does play an important part in inoculating us against unverified information but often – due to a lack of critical and analytical thinking – limited knowledge leads people to find attractive those ideas that highlight some kind of political agenda or a dangerous “other”. It becomes about what “they” don’t want you to know. And “they” are always those sinister people outside of your own clique or those segments of society that you neither like nor trust.

Belief in conspiracy theories therefore becomes a matter of faith rather than evidence. People rationalize their beliefs even if reality tells them otherwise, often relying on circular reasoning, i.e evidence against the conspiracy and an absence of evidence for it are both regarded as evidence that the conspiracy is true.

This has inevitably continued during these unprecedented and stressful times. Our unusual circumstances in the face of Covid-19 have meant that in trying to understand the world in this moment, conspiracy theorists have embraced some very bizarre ideas. The world has suddenly becoming more confusing than it ever was before and this is one way to understand what no one can completely explain…yet.  And the most appealing method of doing so is by dividing the world into us and them; them being those who have instigated this situation for their own ends — the agents of evil — whom the “brainwashed masses” are listening to.

A random and unpredictable event has created a sense of powerlessness and therefore it is explained through suspicious socio-political forces instigating the event. In any case, humans are conditioned to believe repeated, easy to process information, especially when it supports our world view, so the rampant absorption of Covid-19 conspiracies is because they align with people’s pre-existing ideologies and opinions. Undoubtedly, this gives their anxiety an outlet on which to focus. Like Professor Colin Klien from the Australian National University explains: “Conspiracy theories offer an emotionally satisfying narrative, even if it not a true narrative”.

I am certainly not going to go through any of the prevalent conspiracy theories. Suffice it to say they are all beyond the realms of fact. It is however important to note that believing in a cover-up around Covid-19 is potentially dangerous to the overall health of the community if it stops people from taking appropriate precautions to prevent the spread of the virus. Additionally, it can provide a breeding ground for acts of racism, vandalism, and the promotion of dangerous cures.

Now that the vaccine for Covid-19 has been rolled out, conspiracy theories around it have also started to abound. Lack of knowledge of pharmaceutical laboratory and regulatory processes means people are once again willing to pay heed to half-truths and pseudoscience, when it is so easy to look up the fact that we have been working on similar vaccines for decades. Regulatory processes, especially in developed countries like the UK, are extensive. This time too the same processes have been followed, just more quickly than before. But why look for factual information, when a story that feeds our fears is easier to accept?

The only thing rational human beings can do is to look for information from reliable and evidence-based sources and try to promote those sources as much as possible. A famous singer or a YouTube influencer are not the people to rely on for accurate information during these fraught times.

Saima Baig is a UK based Chartered Environmentalist and Director of a Digital Marketing Company.
Share List
Liked it? Take a second to support SEDAA - Our Voices on Patreon!