Last weekend, I celebrated my youngest daughter’s birthday for the first time since I left Salafism (a branch of Islam that believes in a literal approach to the faith). Now that I am no longer bound by ridiculous religious rules, I am free to explore and celebrate the world around me, without giving two fucks about what anyone thinks or is brave enough to say to me.

To see my daughter’s beautiful little face light up as she jumped in delight at my horrible happy birthday canticle made me feel the deep joys of fatherhood. Three candles of different shades of blue sat on top of the little white cake decorated with three roses of green, yellow and blue surrounded by a wall of pastel sprinkles. Not far away, the container of cupcakes she chose herself waited to be devoured; sugar would surely dominate her blood line as dyed frosting would discolor her tongue, lips and cheeks.

When she struggled to blow out the candles twice, I secretly blew them out for her on the third try and then congratulated her for a job well done — it was the fatherly thing to do.

“Daddy, Daddy! My cake is ready! My cake is ready!” she screamed when I cut her first slice – the Mexican-American thing my mother would do for me whenever I celebrated a birthday in the pre-Islamic days of my early Catholicism. The only thing missing was a bottle of liquor, preferably Johnnie Walker Black on the rocks. But due to being on medication from my recovery of Covid-19 (which I contracted in early July), I opted to sip on a tall glass of ice cold water with honey and black seed instead.

Being the deep thinker that I am, the happiness began to soon fade, as I reflected on my little girl’s future. Her mother is a devout Salafi Muslima: she proudly wears the niqab (the Islamic face veil) and abaya (the Islamic body covering); she does not allow music or pictures in her home; she spends her free time reading Quran and tending to her children, from a previous marriage, ensuring that they study their Arabic daily, memorise new chapters of the Quran as well as duaas (supplications) and the Salafi creed.

Don’t get me wrong, she is a wonderful mother and was a perfect wife, but it was religion — or in my case the lack thereof — that caused our separation (although some in her family would argue that it was because I was Mexican-American and not Sudanese-Oromo like her). And it was at that moment where I began to ponder on the place of religion in my child’s future. What would it do to her when she was old enough to understand why mommy left daddy?

The questions ruminated: as she progressed in her indoctrination, will she realise I no longer believe when its time for her to pray? Will she think of me as the “murtad” who mommy left? Will she curse and make dua against me, or instead demean me by asking Allah to guide her misguided father? Will she blame me for my choice not to believe? Will she boycott me and prevent me from her wedding or other family gatherings? So many questions, yet not enough answers to comfort my overwhelmed anxiety.

But most important of all, the biggest question that I feared came to mind. Will she still love me tomorrow, tomorrow as in her future older-self? The thought of being boycotted and abandoned brought tears to me eyes. I quickly wiped them away so that she wouldn’t notice. Then I remembered some advice that a good man (his name is Hassan Radwan) once gave me when I asked him about coming out to my then wife or remaining in the closet out of fearing of losing her and our daughter.

He told me, and I say this verbatim, “…at the end of the day your children will always be your children and although it may mean you miss out on early years you will get an opportunity later to build a good relationship with your children. I hope things work out for you.”

While things didn’t work out for her mother and me, for now, I am building a good relationship with my daughter, until the day comes when I can no longer do so. But the fact remains, as Hassan said, she will always be my child and I will always be her father. No religious belief can ever change that.

I think I will go get some leftover birthday cake and enjoy a shot of whiskey while I read a Kafka story. 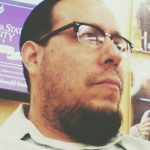 Thomas Maldonado is a Latino, Secular Humanist, who practiced Salafi Islam for approximately twenty-eight years. During that time he translated and published over eight Islamic works from prominent Salafi scholars that are still widely read around the world.