I am a Muslim and, shock horror, I support Prevent, the government’s counter-terrorist strategy. I do so because I have seen the reality of Islamist extremism in my local community for years, despite the denial by so many other Muslims. When I was at university, I remember meeting Muslim women who were calling for the establishment of a caliphate while ranting on about how evil Britain is.

The attack in Manchester was devastating. But last week as I shed tears for the victims, my anger was growing, in particular against what is widely referred to as the Muslim anti-Prevent lobby, who have campaigned against Prevent but now coming out offering us their condolences.

It’s high time we examined some of those groups — ask yourself whether such groups have hindered or helped in reducing the threat of terrorism in our country.

On Tuesday morning, the Muslim Council of Britain released a statement offering their condolences. We’ve been here before.  Statements of condolences and condemnations are always welcome but not if you have repeatedly attacked Prevent and helped create suspicion amongst Muslims about the strategy, including crazy claims that Prevent is driving Muslims towards the arms of extremists.

They also claim that Prevent is not engaging with Muslims.  What the MCB really mean is that the government is not engaging with them.  This is not the 1980s anymore where a representative body made up of community leaders can speak on behalf of all three million Muslims. There are hundreds of Muslim organisations in our country who – rather than having you speak on behalf of them – will choose directly to engage with their government.

I believe this is all a deflection from the fact that they have done little, if anything, themselves to counter radicalisation in our country. I want to know what they have done to prevent young Muslims from being radicalised. Even Nazir Afzal, the former Chief Prosecutor for the Crown Prosecution Service, has rebuked the MCB for having done nothing.

This is the MCB that does little about child abuse, safeguarding in mosques, FM, HBV, gender equity, protecting minorities etc. Good luck https://t.co/lAsn09ZljJ

MCB: Hindered or helped in reducing the threat of terrorism in our country?

After the attack, the advocacy group CAGE put out a statement stating how we now need a “compassionate and just way forward.”

This is from an organisation which campaigns for both convicted and suspected jihadis and, arguably, has repeatedly been an apologist for terror. Not long ago, Sedaa posted an expose on CAGE and their vilification of Muslim countering extremism groups.

None of that, however, has ever stopped them from providing us with their answer on to how to stop terrorism, which, according to CAGE “logic” is to do away with counter-terrorism measures. Disband Prevent in its entirety.

CAGE: Hindered or helped in reducing the threat of terrorism in our country?

MEND’s CEO Shazad Amin tweeted that his thoughts and prayers were with all those who have lost loved one.

In their statement  they also condemned the attack and “urge anyone who has any information about this incident to report this to the police. MEND will offer assistance to the Greater Manchester Police in their ongoing investigation.”

They even set up a fundraising page to raise funds for the families of the victims. How could anyone object?

But here lies what I believe is the hypocritical stance of this organisation. MEND have been one of those Muslim groups at the forefront of campaigning against Prevent. This is evident from the countless events they’ve organised in Muslim communities and on campuses. The student union at Salford University, where Salman Abedi studied, passed a motion last year to boycott Prevent.  The boycott was part of the Students not Suspects campaign, run by the National Union of Students, and supported by CAGE and MEND. MEND have spoken at and supported the Students Not Suspects events. 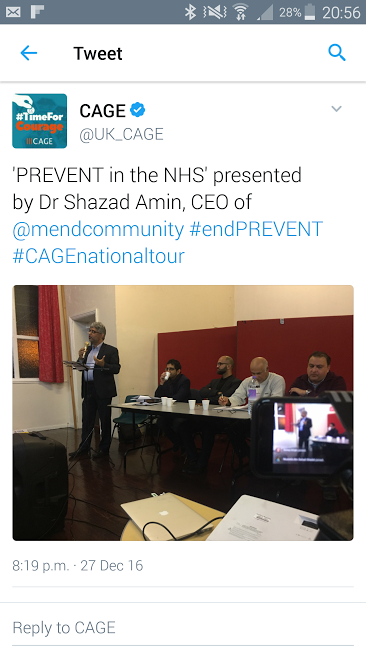 MEND activist Siema Iqbal, who we’ve seen this week speaking on Channel 4 News and the Victoria Derbyshire show on the BBC, also tweeted at that event tagging CAGE, quoting Asim Qureshi’s flawed rationale and saying it was “time to #endPrevent.”

She has been a vocal critic of Prevent spreading further untruths about the strategy and – as is the MEND way – claims it (and everything else they don’t agree with) is “Islamophobic.” 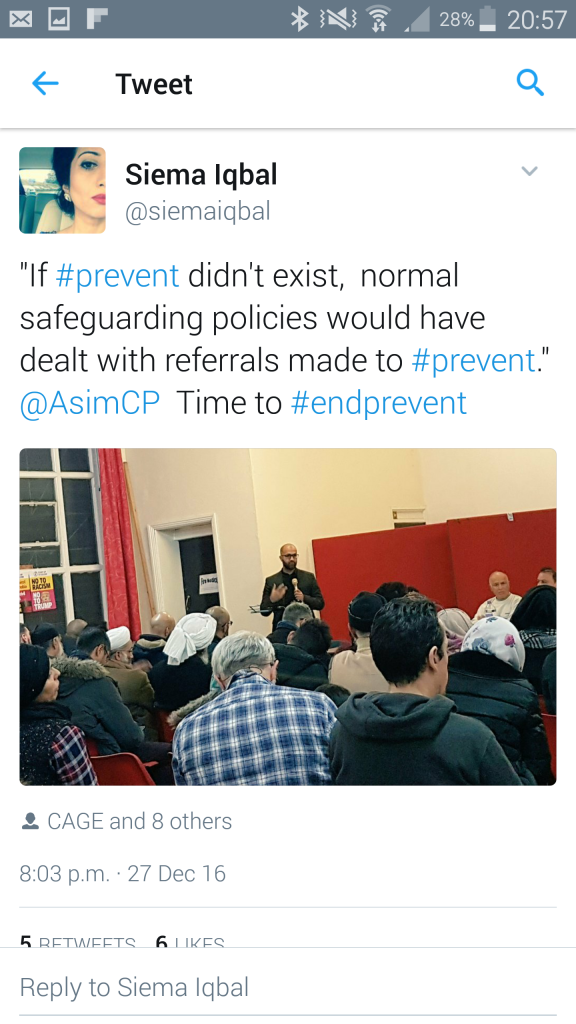 MEND’s Azad Ali, speaking at one CAGE event alongside the notorious Haitham Al Haddad, condemns counter-terrorism laws and bemoans that we Muslims are not praying and praising the mujahideen enough.

In true Jekyll and Hyde behaviour, I believe MEND put on a face of respectability – condemning the Manchester terror attack, while having spent years doing everything in their power to undermine counter-terrorism strategies. So spare us your duplicitous crocodile tears about the attack in Manchester.

If my friend, daughter, son, or husband had been killed I would throw your condolences back in your face and pathetic attempts to raise money for me. Money will not bring my loved one back. What I would have liked you to do is everything in your power to counter terrorism and reduce the threat. Instead, I believe you have done everything in your power to undermine counter terrorism initiatives and, arguably, increased the threat.

How MEND sleep at night is truly beyond me. As a group that claims to campaign against Islamophobia, as a Muslim I see how they increase it; spikes in hate crime against Muslims rise after every terror attack. We’re seeing this now after the attack in Manchester. Are they making any of us safer?

That of course hasn’t stopped some of our politicians supporting MEND, including former Tory party chairman Baroness Sayeeda Warsi who, in her book “The Enemy Within”, praises the organisation and Labour politician Naz Shah who has spoken at MEND fundraising events.  As has Andy Burnham, the Mayor of Greater Manchester who spoke at a MEND fringe event at the Labour Party conference less than eight months ago, whose were frankly shocking.

MEND: Hindered or helped in reducing the threat of terrorism in our country?

Then there are the ‘useful idiots’ of which there are far too many but one in particular:

Simon Hooper, CAGE supporter and journalist at the Middle East Eye, has written countless articles attacking Prevent and Prevent-supporting Muslim organisations, which have been shared thousands of times, contributing to the suspicions about Prevent. He then had the complete audacity this week to write an article asking “about the effectiveness of the government’s counter-extremism strategy.”

In an interview with the Mirror, senior nurse Joe O’Brien gave a distressing account of some of the injuries of last Monday’s victims.

She said patients were suffering horrific shrapnel injuries to their legs after “metal bolts and nuts, some an inch wide, had gone into them”.

“(The shrapnel) had caused real damage and left big holes in people,” she said.  Shrapnel is like a large bullethole. It just destroys anything it goes through – arteries, bones, nerves, the lot. I’ve been in operating theatres since 1988 and it’s the most upsetting thing I’ve ever seen.”

There is a reason why we have a counter-terrorism strategy. There is a reason why we need Prevent. There are some Muslims in our country who support ISIS. We must challenge them. But it is high time my fellow Muslims start asking themselves whether some organisations are part of the solution in preventing such horrific attacks from happening in the future, or if they are fundamentally part of the problem.

Shamim Begum is a British Muslim woman who, having spent years attending events organised by many Muslim groups, realised how divisive their message was.  She is now saying no more.